Yes, it snows in Seattle. 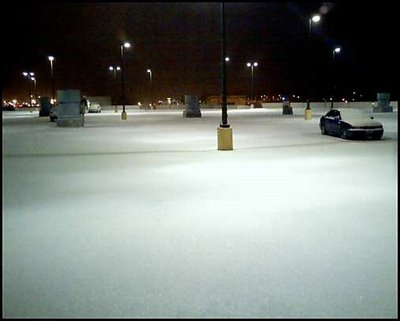 When I was planning our move to Seattle, I did some research on the actual amount of rainfall in Seattle. According to the historical data, Seattle averages 36 inches of rainfall per year, less than Washington DC (39 inches) and New York (40 inches). So, I was perplexed: where did this reputation for "Rain City" come from? Well, it didn't take long to find out: this November has brought rain just about every day, resulting in over 15 inches of rain in this month alone.

It all gets more interesting when a really cold front moves in; that rain quickly becomes snow. Which, in a city that is somewhat hilly and not used to snow, does seem like it could create some serious complications.

Nevertheless, as I prepared to drive my brother to the airport last night, I thought: how bad could it be? The temperature was barely below freezing, and I figured the road crews had had all day to salt and sand the interstates. So we left from Kirkland just after 7:30, which seemed like plenty of time to make a 10:30 PM flight.

As we moved quickly down 405 South past Factoria, it looked like we would be way early. It was only 8:00 and we had just a dozen miles to go. Sure, traffic on 405 North was heavy - but we had been hearing on the radio that locations north of the city were very icy, so this was unsurprising. We passed Exit 9 for Newcastle - and everything stopped.

Not to worry, I thought - there must be a lane closed up ahead, and once we get past the bottleneck, it'll be smooth sailing. After all, we had plenty of time.

But 9:00 came around, and we had barely moved 3 miles. My brother called the airport and found out the flight had been delayed until 11:00 PM. Get there before 10:00, they said, and you'll be fine. But as the snow fell harder and started to accumulate, I began to feel not so fine. Where was the salt and the sand? We started to see cars abandoned on the side of the road.

It was just before 10:00 when we came to a small incline on 405 South between exits 4 and 2. Cars were scattered all over the roadway, pointing in all directions, flashers on, not moving. Curiously, nobody seemed to be doing anything about it. Traffic split into 3 streams, as it was possible for a car to get by on the left shoulder, the right shoulder, or through the center of the stuck vehicles. I chose the left shoulder. Bad choice! The shoulder was completely ice, and as we tried to squeeze by a stuck SUV, the lateral grade of the road sent us sliding toward it. After stopping just inches from the SUV, we were too close to attempt any further forward maneuvers. It was now 10:10 and we were still at least 5 miles from the airport; things were looking quite grim. I threw it in reverse and created some space. A kind person then let us into the center stream of traffic, and we threaded between the SUV and another car oriented in an odd direction.

That mess allowed just a few cars to eke their way through every minute, so the road ahead was mostly empty. Snow was still falling and there was a fair amount of built-up ice on the road, but it was possible to stay in the tracks of the car we were following and maintain a reasonable speed (20 mph). Another call to the airport revealed that we had been given another 10 minutes, with the flight now leaving at 11:10. There was still hope...

We pressed on and exited toward the airport just after 10:30. The road here was less clear, with the pavement visible in only one lane. We slowed slightly as we followed the sign for Departures.

At last, we arrived at the Delta terminal at 10:38. I dropped my brother at the checkin desk and headed for the parking garage in case our efforts had been in vain. I climbed the stairs to the top of the garage to take a look at the roads back home (picture above). Unfortunately, there were brake lights as far as I could see - and hundreds of people waiting for taxis at the empty taxi stand. I resigned myself to the fact that I was going to be sleeping at the airport.

Fortunately, my brother made his flight (barely). And I learned a valuable tip - if you need to sleep at Sea-Tac, head for the children's play area, located near the security checkpoint for B/C gates. There are soft, detachable mats around the playset that double nicely as a mattress, along with electrical outlets to charge your phone/computer. The nearby walls also protect you from chilly drafts from the outside (still, you'll want to wear a coat and hat). Far better than trying to get comfortable in one of those airport chairs...
at 11:55 AM