Did you know that Gmail and Google Talk both support TLS encryption (aka SSL), rendering the data you send to and from Google secure and inaccessible to would-be eavesdroppers? Google Talk uses TLS by default, and Gmail will use it if you point your browser at https://mail.google.com (note the "https" instead of "http").

The use of TLS/HTTPS creates a secure channel between your computer and Google's data centers. This is especially important when your computer is connected to a public network, such as a Wi-Fi hotspot; I have been to conferences where people were known to use packet capture software to spy on competitors who were careless enough to communicate over cleartext channels.

I'm glad to see that Google has made security a priority. Moore's Law has made support for TLS fairly cheap from a operational standpoint, so there's really no good reason to not feature it. Let's hope TLS becomes more common in the web world.

Update: I didn't have time to check extensively, but I noticed Google Calendar and Google Docs & Spreadsheets both support TLS access as well.
at 5:44 PM 4 comments:

I've been tagged by Greg, from his AIM Info blog. The rules of blog tag are simple - tell 5 things that people might not know about you, and then tag 5 other bloggers to continue the chain.

So, here are 5 things you might not know about me:
And my 5 tagees? I've picked 5 other bloggers from the Kirkland office:

Email ThisBlogThis!Share to TwitterShare to FacebookShare to Pinterest
Labels: misc 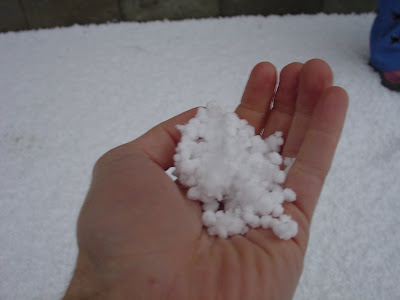 The latest episode in a Seattle winter already replete with ice, snow, rain, floods, and wind added the new wrinkle of pea-sized hail, pouring down from the heavens and skittering across the ground as if from an overturned semi full of Tic Tacs. In just fifteen minutes on Thursday night over an inch of these crunchy bits coated our yard. The hail then turned to snow and continued to accumulate for the next several hours.

Once again, this happened right at the evening rush hour, with typical results. Fortunately, I had elected to work from home, but the Google Talk status messages of my coworkers told of their multi-hour commuting pain. Apparently, in Seattle, if snow starts to fall while you are driving, you must immediately abandon your car on the side of the road.
at 11:15 PM 1 comment:

I've seen a number of comments on the web regarding the previously announced interoperability plans between AIM and Google Talk, especially as the one-year anniversary of the announcement came up at the end of December. Nothing yet has made it into the hands of users, leading some to wonder whether it is actually going to happen. Having followed this effort closely both at AOL and now at Google, it's very interesting to read the various opinions from the outside.

On the Google side, I can simply refer to our official statement, and our stock answer, "We are working actively on integrating AIM access in Google Talk."

And as for a version of AIM that talks to Google users? There has been no comment whatsoever from AOL regarding such a client, so I guess we'll have to wait and see how important this is to AOL's new management team.

However, AOL also appears to be working on an XMPP gateway for AIM, which would allow XMPP/Jabber clients to access the AIM network using AIM screen names. Based on the public information, it seems that this should be available in the near future.

Google Kirkland in the News

A couple nice mentions of the Google Kirkland office in the news in the past few weeks:

When we set up an R&D shop in downtown Kirkland, Washington two years ago, we hoped to attract the best talent in the Pacific Northwest -- folks who are serious about their coffee and don't especially want to move to Silicon Valley. Since then we've attracted many engineers who were tickled silly about working on large clusters of several thousands of machines, not to mention shipping web and client-based consumer apps used by millions of people.

It's such a great office we have here. Google's unusual in a couple of ways. We open engineering offices where the talent is, rather than bringing talent to a location. ... [In Kirkland] we have north of 250 employees, and we're approaching 200 engineers. It's just an incredible growth rate in two years.
[...]
One of the things we're increasingly trying to do is to export Mountain View work to the really incredibly successful non-Mountain View offices. It's clear the Kirkland office is hugely successful. We've got great engineers, great growth rate and incredible delivery. It's clear this is amongst our most successful offices worldwide.

Seattle Times, 12/15/06, "Google retreats from deal in Bellevue, may shop for office space in Seattle"

Oscar Oliveira, a broker at Colliers International in Bellevue, said he believes Google has turned its attention to parts of Seattle, such as Belltown and South Lake Union, which tend to be popular with young technology workers.
[...]
Google has been advertising for workers to fill a range of engineering-related jobs in the Seattle area. About two years ago, Google opened an engineering center in Kirkland, where it has about 250 employees, up 100 from June. Also, Google in May moved its Seattle sales staff of about 30 from South Lake Union to Fremont, saying the staff could expand to 75.
[...]
Google is expanding in Kirkland, where it occupies two floors at Central Way Plaza, and recently took an additional floor at a nearby building, said engineering director Peter Wilson.

“[Microsoft] had a lot of new initiatives, and people ran fast out of the gate,” said Niall Kennedy, an expert on Internet publishing who joined Microsoft last spring but quickly became disillusioned and quit in August. After the stock fell, he said, “I wasn’t able to hire anybody for my group.”

Mr. Kennedy says this culture is inhospitable for talented engineers.

“Microsoft is no longer the primary place for technical talent,” he said. “If there is a superstar, Google will be on their minds.” (Indeed, Google has set up shop in Kirkland, Wash., six miles from Microsoft’s headquarters in Redmond, specifically to welcome Microsoft refugees.)