Most people are surprised when I tell them that I'm working out of Google's Kirkland, WA office. Many have no idea that Google has a presence outside of California - even including many residents of Kirkland - and the rest wonder how much interesting stuff is allowed to happen away from Google HQ.

In short, there's a lot happening in the Kirkland office. With 200+ employees, the office is big enough that it's not just a satellite to Mountain View. Here are just some of the projects that are being worked on in Kirkland:
Kirkland's got a number of other things going for it as well. Recently the Chicagoist website did an interview with some engineers from Google's Chicago office (yes, there is an office there too), asking them why they chose to remain in Chicago instead of moving to California. Since I had had a similar dilemma in choosing between Kirkland and Mountain View, I read this with great interest. The responses were classic:


"It's much more livable [in Chicago]... I could sell my home right now and buy a shed in Silicon Valley. A small shed."
"I would gladly sit through six or seven months of Chicago winter to experience fall."
"I have a kid and I'd much rather raise him in Chicago. San Francisco has more pets than kids."

Substitute "Kirkland" for "Chicago", and you've captured what I was thinking at the time.
at 10:20 PM 5 comments:

While Weird Al Yankovic' "White & Nerdy" resonated with a number of us here at Google, many lamented that it excludes a good part of Google's diverse workforce. When asked whether Weird Al might consider a more inclusive version of the song, his agent was unenthusiastic:

"While Weird Al is willing to poke fun at all races equally, his profession is an artform. We trust that our non-white audience can simply enjoy identification with being 'Nerdy'."

CNBC recently did a interview with President Bush, where he was asked if he ever used Google. From his response, he seems to be a fan:

HOST: I’m curious, have you ever googled anybody? Do you use Google?

BUSH: Occasionally. One of the things I’ve used on the Google is to pull up maps. It’s very interesting to see — I’ve forgot the name of the program — but you get the satellite, and you can — like, I kinda like to look at the ranch. It remind me of where I wanna be sometimes.

You can watch the video over at ThinkProgress.

Also, you can find the president's Crawford, TX ranch on this Google Maps search.
at 5:47 PM 1 comment:

Seeing Yahoo! in the top position was unexpected (I would have thought MSN), but it is also interesting how tightly grouped the rankings are. With a standard deviation of only 20 points, I wonder what the margin of error for the survey is. Also note the absence of ICQ and Skype.

Nevertheless, as we move toward a world with IM interoperability, customer satisfaction becomes much more important, since users will be able to choose the IM network they want to use. The eventual winners will be the networks that focus on the end-users, rather than short-term monetization.

The survey also reported these interesting factoids:
You can read more details on the survey at BigBlueBall.
at 10:08 AM 4 comments:

So where exactly is Kirkland? 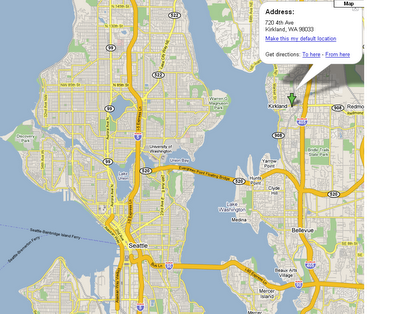 I'm working out of Google's Kirkland office, and when I tell people that, the next question usually is "Kirkland... where is that?" (or less polite versions)

Well, Kirkland is a suburb of Seattle, just across Lake Washington (map). It's right on the lake, and with its downtown area, public waterfront, and numerous parks (including two with free wireless), there's a lot of stuff to do. It's also only about a 15-20 minute drive from Google's office in downtown Kirkland to downtown Seattle, making it (IMO) a good balance between city and suburban living. Naturally, people have their own preferences - an unscientific poll of Kirkland Googlers reveals that people without kids tend to live in Seattle, whereas those with families live in Kirkland or elsewhere on the Eastside.

I've been living in Kirkland for a few weeks, and so far, it's been really nice, although I hear the rainy season is about to start. Here are some Kirkland resources that I like to check out:
Kirkland Weblog
Kirkland Photo Pool 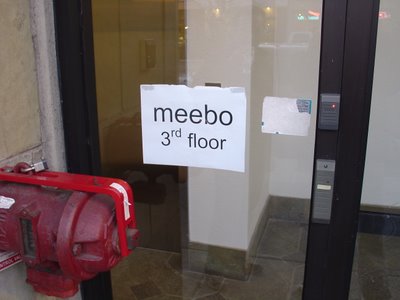 Stopped by meebo's new (and still under construction) offices in Mountain View yesterday for a non-work-related visit. Like Google, meebo is all about products that focus on a great user experience - and it's enabled them to carve out a decent niche in a space with nontrivial barriers to adoption.

Just want to say thanks to everyone who wrote in to wish me well on my transition to Google. Between leaving my old job, selling our house, moving across the country, finding a new place, and starting a new job, it's been a hectic 3 weeks.

Amazingly, news of my move was even picked up by some websites/blogs, each with their own spin on things:
Digg (WebProNews)
WebProNews (another article)
SearchEngineWatch
eWeek 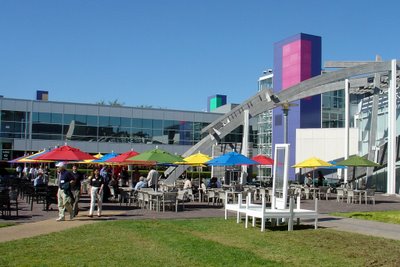 I am now a Googler. It's been almost 10 years since I last started a new job, and it feels a little weird.

During orientation, we were asked what terms we would use to describe Google. My choice: "colorful". More than just the choice of palette, everything (and everyone) at Google seems to have a bit of a whimsical bent. As a former co-worker once put it: "When you use a Google product, you feel like it's giving you a little hug."

I now understand that this "colorful" attitude has a practical benefit as well: it helps take my mind off the fact that I need to understand and master countless new tools and systems essential to my job, preferably by the end of the week...

Email ThisBlogThis!Share to TwitterShare to FacebookShare to Pinterest
Labels: google

A warm welcome to readers of my previous blog, "Tales of a Running Man", about life at AOL and the AOL Instant Messenger system.

Now that I will be working for Google, I intend this new blog to be a similar look at life inside Google and the various projects I work on. Not sure exactly what I'll be allowed to post, but I should find out in employee orientation tomorrow...
at 10:44 PM 8 comments: